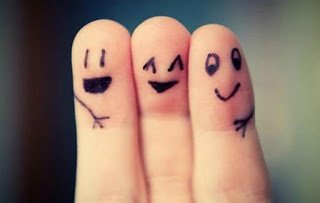 A little while ago, I was listening to a the Happier Podcast with Gretchen Ruben and
Elizabeth Craft and their “try this at home” segment suggested reviving a
dormant friendship.  You know the ones,
people you used to be friends with, but have drifted from because life gets
busy.  I thought it was a nice idea but
did nothing to pursue any of my dormant friendships.  I thought “I’m too busy to fit in my current
friends, how will I fit more in?”
Well, it turns out you can!
Not long after listening to that podcast, I had a call from my best
friend from primary school!  She was
going to be in town for her school reunion and was wondering if we could find
time to catch up.  It made me so happy to
hear from her and we got together for a coffee soon after she arrived.  She got to meet my son, we caught up on all
that had been happening in our lives since we last saw each other (probably
about seven years!), and I really enjoyed her company for the afternoon.
Not long after that I had a friend request on Facebook from
someone I was close to in high school.
She was one of my closest friends at the time and we spent a lot of time
together.  We had lost touch over the
years and her request to reconnect threw me a little bit.  She sent me a heartfelt message apologising
for something that had happened almost twenty years ago (which I had long
forgotten and moved on from!), and we chatted via message for a while.  Then she asked us over for dinner.  I was a little nervous to be going to her
house.  It had been a really long time
since we saw each other, and by the sounds of it we didn’t end our friendship
on very good terms.  A long time had
passed though, and I thought it was really gutsy of her to reach out to me
after so long to apologise.  Clearly
whatever happened between us had more of a lasting negative effect on her, and
I was happy to be able to help her move on from that negativity by accepting
her invitation of friendship.  And I’m so
glad that I did.  Our families had a
lovely night together and plan to spend more time together in future.
Soon after I was contacted by that friend, it was my school
reunion.  I had the pleasure of
reconnecting with a number of people there, but to be honest, most I wont see
until our next reunion.  There was one
couple though who I really enjoyed spending time with and we are organising to
catch up again after the craziness of the Christmas season is over.  I am already looking forward to it.  My friend from school and his girlfriend are
easy to get along with, and I can see us easily filling in a lazy Sunday afternoon
with barbeques and laughs.
When I heard the podcast about reviving a dormant
friendship, I had no idea that three were coming my way.  I am so grateful that those three people had
the courage to reach out.  On each
occasion, it was really uplifting to hear from them.  So often we think of other people, but in our
busy rush of life never follow up,  so
that person never actually knows you are in their thoughts.  To be on the receiving end of contact like
that is so lovely. 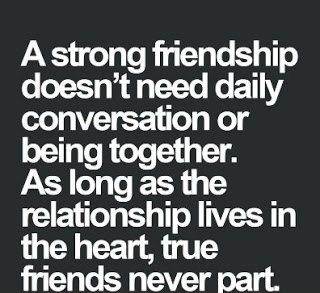 Even after so much time has passed, there is an intimacy
with old friends that means you don’t have to start all over again like you
would with a stranger.  There is a common
shared experience, memories, laughs, good times, not so good times, that bond
you forever.  I like to think that with
each person I’m friends with I give a little piece of my heart to them.  I can never get that piece back, nor give it
to anyone else.  So with so much time
passed, it is nice to know that piece of my heart is still cherished.  And sometimes, by the people you least
expect.
I was afraid on all three occasions that it would be awkward
to meet up with these old friends.  Would
we have stuff to talk about?  Would it be
a mistake?  Would they wish they never
got in touch again?  I suppose it is all
the younger-self insecurities that were talking there.  With all three friends, after the initial
nerves about meeting were gone, we relaxed into catching up and everything was
fine.  They are all still the lovely
people that I knew in the past.  We still
have that shared history as a starting point.
And (hopefully) we still have a long time to continue our friendships.
The essence of who they are is still the same.  Still open, caring, kind people.  I hope they think the same of me.  They have all grown into their best qualities
with time and I look forward to making time to fit them into my life
again.
Is there anyone you have been thinking about lately from
your past?  Maybe now might be a good
time to reach out and let them know.  You
might just make their day.  And maybe,
they might make yours too.
Until next time,
E xx

This site uses Akismet to reduce spam. Learn how your comment data is processed.